Conference report: On parliaments during war and revolutions, St.Petersburg, Oct. 2 2018 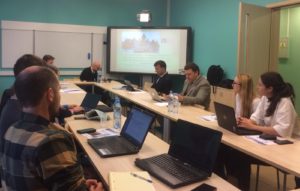 In April 2017 EuParl.net welcomed the Center for Historical Research at the National Research University Higher School of Economics St. Petersburg and its director Alexander Semyonov in its ranks. On the occasion of this recent membership and the numerous upcoming as well as elapsed Revolution centenaries the Center for Historical Research hosted an international workshop on »Parliamentarianism and Representative Democracy in Crisis of War, Revolution and Collapse of Empires« on October 2, 2018, in St. Petersburg.

As its title implies, the workshop addressed the impact especially of the First World War and its aftermath on the development of Parliamentarianism and Representative Democracy in Europe. Not less than seven European countries, namely Russia, Luxembourg, former Yugoslavia, Germany, Great Britain, Sweden and Finland, were addressed. This instance is insofar remarkable as the group of participants was small in number due to difficulties in the visa-process. Nonetheless had the workshop been fruitful and inspiring and offered the opportunity for interesting discussions.

A brief introduction by Alexander SEMYONOV and some remarks concerning the network’s current work by Jure GAŠPARIČ, member of the Board of Directors of EuParl.net, opened the meeting.

In his keynote address, Alexander SEMYONOV (Higher School of Economics, St. Petersburg) raised the question, if Parliamentarianism in Russia from a historical point of view was and is after all »doomed« or »in crisis«. His contribution turned out to be a persuading plea for a more differentiated history of Russian Parliamentarianism. »Doomed« thereby referred to a specific interpretation of the history of political representation that treats Parliamentarianism as naturally short lived and a »non-organic experiment« in Russian history, which resulted from the Empires defeat in the Russo-Japanese war 1905. Autocracy in contrary is claimed to be Russia’s »natural political way«. This interpretation, which amongst others the American scholar Richard Pipes was empathic on, is somewhat a Russian Sonderweg-thesis. It discredits all forms of political representation and of constitutional arrangements until this day. Thus its continuing popularity amongst Russian historians and the Russian public is for Semyonov one major reason for the ongoing crisis of Russian Parliamentarianism. Given this impact of the interpretation, Semyonov strongly argued for a new sight on the history of political representation, which on the one hand ought to take into consideration the emergence of an idea of political representation in the face of social and political crisis in 1905/6, that made possible the election of the first Russian parliament – the Imperial State Duma. On the other hand this new approach should also recognize that the Imperial State Duma was quite successful at its work. The bills it passed had for example a strong impact on the modernization of the Empire.

That the failure of Russian Parliamentarianism is not a mere destiny explainable through the alleged autocratic nature of Russian politics was also shown by Konstantin TARASOV (St. Petersburg Institute of History of the Russian Academy of Sciences, St. Petersburg State Electrotechnical University »LETI«), who emphasized the importance of soldiers organizations and the so called »committee class« in the development of the revolutionary process in 1917, which finally overthrew not only the monarchy but also the Provisional Government and with it Russian Parliamentarianism. Tarasov therefore highlighted the fragmentation of the Imperial Army in at least three political groups during the February and the October Revolution: first the nobles, who continued supporting the tsar, second the »middle-strata-soldiers«, who formed soldiers’ committees and backed the introduction of a representative democracy respectively the Provisional Government and third the »peasant-soldiers« that were in favour of a direct democracy because parliamentary representation had failed to address their needs. He showed that all of these groups took action and influenced the outcome of the 1917s Revolution and thereby shaped Russia’s Parliamentary and democratic history – which meant bringing it to an early end.

Whereas in Russia Parliamentarianism and Representative Democracy 1917 stopped being, Pasi IHALAINEN (University of Jyväskylä, Finland) diagnosed »Springs of Democracy« both in Britain, Germany, Sweden and Finland during the period between 1917 and 1919. His contribution summarized the main results of his recently published book of the same title, in which he compared national and transnational debates on Constitutional Reforms in the mentioned countries. The given analysis, while specifying the common and distinctive features of national debates, unravelled the transnational links between the outbreak of the Russian Revolution and the gained constitutional compromises of 1918–19 in Britain, Germany, Sweden and Finland. The First World War, according to Ihalainen, not only caused a simultaneous development of the Reform process in all reviewed countries, but also lead to a crisis of political legitimacy in which the Russian Revolution appeared as an even bigger threat to the existing orders. Both war and revolution became catalysers for more or less enforced constitutional reforms and democratization processes, which lead to a redefinition of the concepts »people« and »parliament« and to »Springs of democracy«.

The development Ihalainen outlined also applied to Luxembourg. After the war and facing the possibility of a workers‘ uprising, the concept »people«, as showed by Renée WAGENER (University of Luxembourg), has been politically redefined in the Grand-Duchy. To fortify her point of view she shed a light on the process of introducing universal suffrage in Luxembourg from the pre-war census to the first workers‘ strikes 1917 until its implementation in January 1919. Her primarily analytical focus were parliamentary discussions concerning the new constitution and in particular article 52 which determined suffrage. When finally adopted in January 1919 the constitution granted suffrage for men and women alike. Hence it was not less than a tremendous step of democratization, one little drop of bitterness was marring the overall evaluation of this development. As a matter of fact it hadn’t been conviction or the women’s influence that finally brought women’s suffrage but short-term electoral considerations of Luxembourg’s Conservative Party, hoping for women’s votes to save the monarchy. Nevertheless the case of Luxembourg is yet another example how war and crisis eventually lead to a strengthening of representative democracy and Parliamentarianism.

Regarding the case of former Yugoslavia, »War, Crisis and Collapse of Empires« in contrary marked the starting point of an eventful history of Parliamentarianism in the first place. In an original approach Jure GAŠPARIČ (Institute of Contemporary History, Slovenia) analysed the fragility of Parliamentarianism and representative democracy in the newly formed multi-ethnic state. He showed, that the environment where any parliament holds its session as well as its assigned building precondition the self-awareness of its members and expert staff. Because of that Parliamentary buildings – and parliaments through it – are a means of communication with citizens. Their architectural appearance is not only a matter of aesthetic principle, but political convictions as well. In the case of Yugoslavia, as Gašparič pointed out, the characteristic of the different parliamentary buildings, starting with the Old King Court, followed by the Cavalry barracks (1920–1929) up to the Manjež Theatre (1931–36), where it was placed by Alexander I to discredit it as a talking shop, showed not only the unsolved national question of the multi-ethnic state but also the weakness of democracy itself. Nonetheless the construction of a new parliament building started right after the founding of Yugoslavia. This was to show the Ottoman Empire as well as the rest of the world, that Yugoslavia was an independent state. It wasn’t until 1936 that the Parliament could move into its own building, the »House of the National Assembly«, which until today is the seat of the Serbian‘ parliament.

The presentation of the panels were followed by a lively discussion that deepened the introduced topics and helped sharpening some research approaches. Particularly outstanding was yet the possibility of continuing to examine Gašparič’s thesis at the historical site of Russia’s first parliament, which the workshop’s participants were offered to visit at the end of the conference. The gained first-hand experience and various explanations given by Alexander Semyonov on the »Tauride Palace«, which hosted the Imperial State Duma from 1906–1917, verified the correlation between the parliamentary environment, the political meaning of Parliamentarianism and the state of democracy. Surrounded by the tsar’s barracks the Duma could have easily been eliminated at any time. Unnecessary to say, that this location expressed another Parliament’s weakness.

The excursion to the »Tauride Palace« concluded an informative conference, which put current approaches and questions of parliamentary research to the discussion and promoted academic exchange across borders.