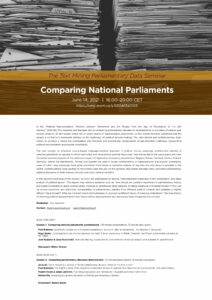 In the “Political Representation: Tensions between Parliament and the People from the Age of Revolutions to the 21st Century” (2021-26), Pasi Ihalainen and the team aim at comparing parliamentary debates on representation in a number of nations over several centuries. All democratic states rely on some degree of representative government, so the tension between parliament and the people is central to fundamental debates on the legitimacy of political decision-making. The international and multidisciplinary team wishes to conduct a pioneering investigation into historical and present-day constructions of parliamentary legitimacy surrounding political representation and popular sovereignty.

The team adopts an empirical, source-based, language-sensitive approach to political history, analysing constitutional debates in national parliaments as nexuses in which multi-sited and transnational political discourses have intersected in the same space and time. Computer-assisted analyses of the extensive corpora of digitised parliamentary records from Belgium, Britain, Denmark, France, Finland, Germany, Ireland, the Netherlands, Norway and Sweden are used to locate confrontations on representation and popular sovereignty, some of which may previously have gone unnoticed. Macro-level comparative analysis of big data has only become possible in the 2020s. Contextualising close reading of micro-level cases focuses on the dynamic relationship between intra- and extra-parliamentary political discourses in both national contexts and cross-national transfers.

In this opening workshop of the project, we invite the participants to discuss methodological challenges in the comparative (big data) analysis of political speech. The papers may address questions such as: How should we combine experience in parliamentary history and digital humanities to apply existing digital methods to ambitiously large datasets, bridging traditional and digital research? How can we ensure synchronic and diachronic comparability of parliamentary debates from different political contexts and available in slightly different data formats? What are the best mixed methodologies in uncovering different layers of meaning embedded in the long history of debating political representation? How have political representation and democracy been integrated discursively?